Written Off, by Sheila Lowe

Posted on November 17, 2017 by thedarkphantom 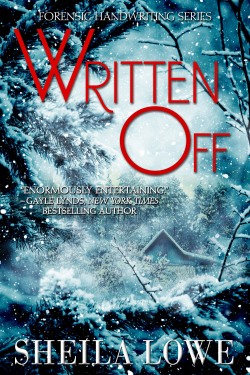 Find out more on Amazon

In the dead of winter, handwriting expert Claudia Rose journeys to Maine to retrieve a manuscript about convicted female serial killer, Roxanne Becker.  While searching for the manuscript, written by Professor Madeleine Maynard, who was, herself, brutally murdered, Claudia uncovers a shocking secret about a group of mentally unstable grad students, selected for a special project, and dubbed “Maynard’s Maniacs.”  Was Madeleine conducting research that was at best, unprofessional—and at worst, downright harmful, and potentially dangerous? Could that unorthodox research have turned deadly?

Claudia finds herself swept up in the mystery of Madeleine’s life—and death—and makes it her mission to hunt down Madeleine’s killer.  But Claudia soon realizes that Madeleine left behind more questions than answers, and  no shortage of suspects.  Seems the professor’s personal life yields a number of persons who might have wanted her dead—and her academic success and personal fortune clearly made her the envy of fellow faculty members.   The University anticipates being the beneficiary of Madeline’s estate—but that seems in question when a charming stranger, claiming to be Madeleine’s nephew, turns up brandishing a new will.

The local police chief prevails upon Claudia to travel into town to examine the newly produced, handwritten will. Rushing back to Madeleine’s isolated house to escape an impending storm, Claudia becomes trapped in a blizzard.  With a killer.

Intelligent and engaging, bristling with tension, twists and turns, Written Off is a pulse-pounding tale that grabs readers on the first page and doesn’t let go. With its appropriately chilling Maine winter backdrop, compelling characters that spring to life in the novel’s pages, and seamlessly-plotted storyline, Written Off brings spine-tingling thrills and plenty of chills. Resplendent with fascinating details informed by Sheila Lowe’s experience as a forensic handwriting analyst, Written Off is an extraordinary—and extraordinarily terrifying—work of psychological suspense. Smart and suspenseful, tense and intense, Written Off will leave readers gasping for breath.

The cabin was the size of a master bedroom; a ramshackle shed whose cedar logs had expanded and contracted, until the spaces between them were large enough to admit small vermin. Inside, the musty smell and scat on virtually every surface confirmed that many such creatures had availed themselves of the accommodations over the years while it fell into disrepair.

It had been unused for so long that few in the village of Summerhays remembered that the cabin stood—or more accurately, leaned—in the overgrown clearing in the woods, let alone who had built it, though most folks readily agreed that given the one room, a hunter was more likely than a family to have occupied the place.

No evidence of any dweller endured; no furnishings other than a rough-hewn kitchen chair. No guesses how long the chair had stood in front of the old wood-burning stove, waiting for someone to sit down and warm their hands.

Each summer, the vegetation crept closer to the cabin. What little light that managed to penetrate the sagging windows was murky at best. In winter, even when the trees were stripped of their leaves as they were now, the metallic snow-laden skies darkened the cheerless room to a permanent dusk.

It was through those grimy, sagging windows that searchers spotted the remains of Professor Madeleine Maynard.

Chaos theory—the science of surprises—teaches that one small change to a system can later produce tremendous, and often unintended, consequences. You start the day taking a friend to the doctor and make a choice that ends up altering lives. Including your own.

Claudia held open the doctor’s office door and followed Zebediah Gold out into the hallway. The week following hip surgery he was eager to get back to the gym, to long walks on the beach and driving his car whenever he felt like it. To his chagrin, he was being forced to understand that in his early seventies his body took longer to heal than it used to. The patience he generously imparted to his psychotherapy clients was less evident when it came to himself, and the unhappy thump of his cane on the polished floor shouted his feelings louder than an F-bomb.

That he was stewing over something had been noticeable from the moment Claudia picked him up at the guesthouse where he lived in Venice Beach, The drive to the Beverly Hills medical building made in near silence. Even when she told a silly joke that on any other day would have made him groan, Zebediah—ordinarily the most good-humored person on earth—barely responded.

He had not flirted with woman at the front desk, nor the nurse, and that was definitely out of character for her friend. Now, back at the elevator, Claudia kept waiting for him to tell her what was on his mind. By the time she pressed the button for P2, she was burning with curiosity and could no longer contain it.

“What did the doctor say? How’s your progress?”

The noncommital answer was infuriatingly unsatisfying. Claudia was glad when no one else shared the ride to the parking garage. She held the view that when shared with strangers the trip took longer, everyone uncomfortable, avoiding eye contact by watching the floor numbers flash past. Her friend Kelly Brennan would inevitably make some ribald quip to break the ice. If Kelly were there now to vamp with Zebediah, she would certainly have found a way to make him laugh.

They bumped to a stop at the subterranean parking level. Dozens of parked cars and she and Zebediah the only humans in sight. It made Claudia think of earthquakes and being trapped underground. “Would I get an answer if we played twenty questions?” she asked, her voice hollow in the gloomy cave-like structure.

This time, he managed a faint smile. “Twenty questions sounds like fun.”

“Number one, is there a problem with your recovery?”

“Not at all, darling, I’ll be leaping tall buildings in a single bound by tomorrow.”

“So, does that mean you got a clean bill of health?”

“All is well, Doctor Rajagopian says I’m right where I should be.”

“Then what’s with all the cane thumping?” Reaching his Lexus, Claudia opened the passenger door. Zebediah handed her the cane and maneuvered into the seat. In his present condition it was easier for him than her low-slung classic ‘85 Jaguar. “Too many restrictions,” he grumbled. “No air travel for three months.”

She handed him back the cane and went around to the driver’s side. Up the winding slope to the exit, she inserted the parking ticket in its slot, happy to see daylight. “What’s the problem? You don’t need to fly anywhere in the next three months.” He didn’t say anything and she glanced over at him. He was staring down at his hands, twisting in his lap. “Do you?”

“As it happens…” Zebediah started, then broke off. The gate arm rose, and Claudia shouldered the Lexus into the endless stream of vehicles on Wilshire Boulevard. L.A. might have dealt the smog a crippling blow, but the traffic monster consumed the Southland with the appetite of King Kong.

“As it happens, what?” she asked when Zebediah left his words hanging.

“Yes, darling. It’s a large state on the East Coast.”

“I know where Maine is, thank you. What’s there?”

“Blueberries in the summer. Loads of snow in the winter.”