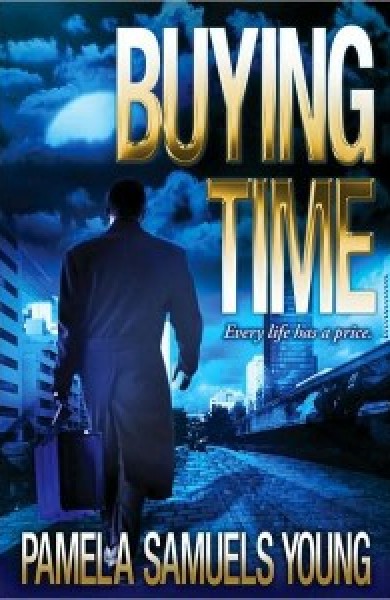 Buying Time is a scandalous tale of blackmail, murder and betrayal, evoking John Grisham with a dash of Terry McMillan.

Waverly Sloan is a down-on-his-luck lawyer. But just when he’s about to hit rock bottom, he stumbles upon a business with the potential to solve all of his problems.

In Waverly’s new line of work, he comes to the aid of people in desperate need of cash. But there’s a catch. His clients must be terminally ill and willing to sign over rights to their life insurance policies before they can collect a dime. Waverly then finds investors eager to advance them thousands of dollars—including a hefty broker’s fee for himself—in exchange for a significant return on their investment once the clients take their last breath.

The stakes get higher when Waverly brokers the policy of the cancer-stricken wife of Lawrence Erickson, a high-powered lawyer who’s bucking to become the next U.S. Attorney General. When Waverly’s clients start dying sooner than they should, both Waverly and Erickson—who has some skeletons of his own to hide—are unwittingly drawn into a perilous web of greed, blackmail and murder.

Soon, a determined federal prosecutor is hot on Waverly’s trail. But when the prosecutor’s own life begins to unravel, she finds herself on the run—with Waverly at her side.

Veronika Myers tried to convince them, but no one would listen. Her suspicions, they said, were simply a byproduct of her grief.

Each time she broached the subject with her brother, Jason, he walked out of the room. Darlene, her best friend, suggested a girls’ night out with some heavy drinking. Aunt Flo urged her to spend more time in prayer.

Veronika knew she was wasting her time with this woman, too, but couldn’t help herself.

“My mother was murdered,” Veronika told the funeral home attendant. “But nobody believes it.”

The plump redhead with too much eye shadow glanced down at the papers on her desk, then looked up. “It says here that your mother died in the hospital. From brain cancer.”

“That’s not true,” Veronika snapped, her response a little too sharp and a tad too loud.

Yes, her mother had brain cancer, but she wasn’t on her deathbed. Not yet. They had just spent a long afternoon together, laughing and talking and watching All My Children. Veronika could not, and would not accept that the most important person in her life had suddenly died. She knew what everyone else refused to believe. Her mother had been murdered.

“Did they conduct an autopsy?” the woman asked.

Veronika sighed and looked away. There had been no autopsy because everyone dismissed her as a grief-stricken lunatic. When she reported the murder to the police, a disinterested cop dutifully took her statement, but she could tell that nothing would come of it. Without any solid evidence, she was wasting everyone’s time, including her own.

“No,” Veronika said. “There wasn’t an autopsy.”

Veronika let out a long, exasperated breath, overwhelmed by the futility of what she was trying to prove. “Never mind,” she said. “What else do you need me to sign?”

* * *
Later that night, Veronika lay in bed, drained from another marathon crying session. She rummaged through the nightstand, retrieved a bottle of sleeping pills and popped two into her mouth. She tried to swallow them dry, but her throat was too sore from all the crying.

Tears pooled in her eyes as she headed to the kitchen for a glass of water. “Don’t worry, Mama,” Veronika sniffed. “I won’t let them get away with it.”

Just as she reached the end of the hallway, a heavy gloved hand clamped down hard across her mouth as her arms were pinned behind her back. Panic instantly hurled her into action. Veronika tried to scream, but the big hand reduced her shriek to a mere muffle. She frantically kicked and wrestled and twisted her body, but her attacker’s grip would not yield.

When she felt her body being lifted off the ground and carried back down the hallway, she realized there were two of them and her terror level intensified. But so did her survival instinct. She continued to wildly swing her legs backward and forward, up and down, right and left, eventually striking what felt like a leg, then a stomach.

As they crossed the threshold of her bedroom, she heard a loud, painful moan that told her she had likely connected with the groin of one of her assailants.

The men dumped her face down onto the bed, her arms still restrained behind her back. The big hand slipped from her mouth and Veronika’s first cry escaped, but was quickly muted when a much heavier hand gripped the back of her neck and pressed her face into the comforter.

Fearing her attackers were going to rape, then kill her, Veronika defiantly arched her back and tried to roll her body into a tight ball. At only 130 pounds, she was no physical match for her assailants. They easily overpowered her, forcing her back into a prone position. As one man sat on her upper legs, strapping her left arm to her side, the other man bent her right arm at the elbow and guided her hand up toward her forehead.

During the deepest period of her grief, Veronika had longed to join her mother. But now that she was face-to-face with the possibility of death, she fought valiantly for life.

That changed, however, the second Veronika felt something cold and hard connect with her right temple. She stiffened as one of the men grabbed her fingers and wrapped them around the butt of a gun. At that precise instant, Veronika knew with certainty that her suspicions were indeed fact. Her mother had been murdered and now the same killers had come to silence her before she could expose the truth. And just like her mother’s death, her own murder would go undetected, dismissed as the suicide of a grieving daughter. A conclusion no one would question.

As the man placed his hand on top of hers and prepared to pull the trigger, a miraculous, power-infused sensation snuffed out what was left of Veronika’s fear, causing her body to go limp. The heavy pounding of her heart slowed and she felt light enough to float away.

Completely relaxed now, Veronika closed her eyes, said a short prayer, and waited for a glorious reunion with her mother.